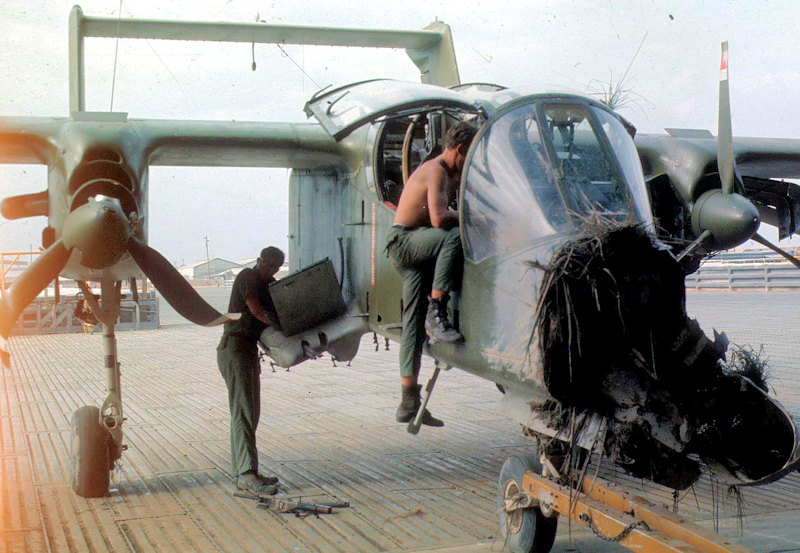 Ron Beeley writes:
It's former LT(jg) Ron Beeley, the pilot in the front seat of 155394 on January of 1971. LT(jg) Lynn Henish and I had just been scrambled about 0100 hours. We were the wing aircraft in a flight of two.

The scramble occurred in the middle of the night in a pouring rain storm. When we jumped into the plane and shut the canopy to keep from getting soaked, I didn't get the back pin in the latch. I got the front pin in the latch, but not the back pin. Because it was dark and raining and because we were obviously in a hurry (scramble with troops in contact) neither of us noticed the pin in the wrong place. Upon take off at about 1000 feet, the canopy blew off. My map bag which was sitting on the dash started spitting out those dozens of maps we carried. Each map became a wet swirling object in the cockpit before exiting out the top or side many of which managed to engulf my helmet. So as I was pulling these wet maps off my face, it became obvious that we were losing power on one or both engines (I at first thought the canopy had blown clear over the top of the aircraft and had damaged the right prop). Thank god for those big dual vertical stabilizers which allowed me to keep full power on the plane. However, full power was not enough and we (FULLY LOADED WITH AMMUNITION) started to slowly loose altitude as I turned back down wind.

I immediately considered dropping all of my ordinance to lighten our load but there was a small Vietnamese village below us and I couldn't drop it there. I continued losing altitude and as I reached the end of the runway I was now over a burning dump and again thought that might be a poor place to put all those rockets. So I kept full power on both engines and just barely made the 180 degree turn on to the runway. I got the plane lined up with the runway with just a few feet of altitude left and dropped the landing gear. I actually landed with my throttles at full power on both engines but apparently the left engine was just seconds away from full failure. So when I pulled the throttles back into reverse the left engine failed and the right went into full reverse. On the wet runway this imbalance in thrust immediately turned us to the right and our near 100MPH foreword speed propelled us off the runway. I pulled the right engine out of reverse thrust but by the time I reacted we were already on a really bad Bronco ride through the elephant grass. This quickly came to an end when the front wheel went into a canal which caused the airplane to stand on its nose for a second before falling back down onto the mains. When it went up on its nose the nose collapsed leaving me looking at water and elephant grass just a couple of feet away from my face. All the while I was hoping that Lynn would ride it out with me and not eject. He did including the last few seconds of the ride which if we had ejected then, we would have shot ourselves right into the swamp. The aircraft had just barely settled back down when as I reached to shut off all of the ordinance and the electricity, Lynn was already outside yelling at me to get the F... Out! We sloshed the 25 yards back to the runway through the rain and elephant grass. Sadly looking back on a still smoldering wreck.

As an interesting aside, it was raining so hard the guy in the tower couldn't see us and didn't even know we had crashed so no emergency vehicles were dispatched. Our lead had landed while we were still in the elephant grass and informed the tower and base that we had crashed, but we actually walked all the way back to the ready room with no firetruck in sight.

I still think of the water and the elephant grass and the luck that the plane ended right side up that night and sometimes it is really hard to believe in just two months I will have lived another 1/2 of a century past that night. Weird how our lives play out. Now that I am old, I miss that companionship we formed as young men, but damm glad I am still alive to miss it (despite not getting the canopy pin in the right place). - Ron

And Lynn recalls:
We were on a scramble 1 out to Rach Gia with LCDR Fritz Lynch as our lead a/c. It was around 0200 in the midst of a monster monsoon rainstorm. We lifted off normally and began climbing on our rendezvous with lead. At 800' AGL as we entered the cloud deck, the canopy exploded shattering the left front and overhead sections, I believed at the time. Water poured into the cockpit from the storm, the 120 mph wind making it seem as though we were under a waterfalls. The winds also made it impossible for either of us to communicate with either each other or the tower due to our use of lip mics. The wind and rain were hitting me directly in the face when I realized that my visor had been blown up by the wind. Once I lowered it again, I could see out the starboard side and noticed the blue field lights and that Ron had successfully descended below the cloud ceiling while maintaining controlled flight and negotiating a right turn back to a downwind position.

On final at about 50' above touchdown at the extreme approach end of the runway, Ron selected full reverse, misjudging our altitude above ground due to the extremely low visibility due to the rain. The aircraft fell straight down impacting the runway with a severe jolt and immediately swerved to starboard due to lack of reverse thrust on the port engine. We hit the swamp grass at the 120 kits. I had noticed on final while crosschecking approach speed on final. Immediately, our nose wheel dug into the swampy ground and the right wing dipped and dug into the grass and water, tearing the wing pod and Zunis partially off the front attachment point it seemed.

Things were happening fast ...
The plane began to cartwheel and, once back on its nose, dug into the dirt, sending the plane up onto its nose vertically. I though, "It's gonna land upside down, so up is down and down is up for evacuating the cockpit!" The plane, however, had just enough torque to twist enough to land on its belly instead and came to rest facing the direction from whence we had come.

The thought had crossed both of our minds to eject as the fuselage went vertical, but we realized that we were out of the envelope by then. We evacuated quickly as we saw the right engine smoking (actually steaming from the water hitting the hot turbine section) and made our way to the bank of the runway by pulling ourselves through the water and grass by the grass stalks.

Once on the runway surface, we realized our first mistake ... we had landed a mile and a half from our bunker! It was a long, reflective evening walk back home. When we finally arrived at the bunker, we were washed clean by the monsoon. We entered and told the Duty Officer to call Fritz and tell him that we wouldn't be joining him that evening. "We're hittin' the rack" and we headed for the bunk room. Shortly thereafter, CDR Rausch roused us out of our sleep and suggested that we write our After Action Report while it was still fresh in our memories ...
That's about it ... long ago and far away. 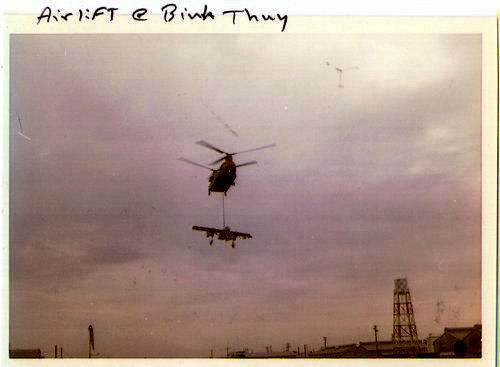 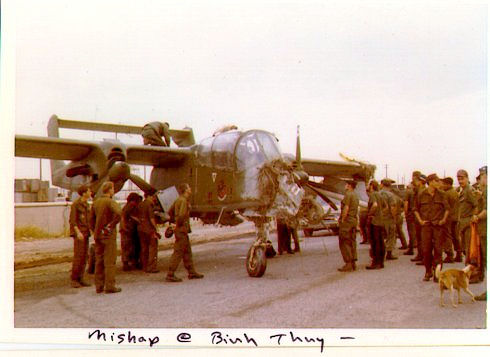 Broke Bronco On The Ramp At Navy Binh Thuy 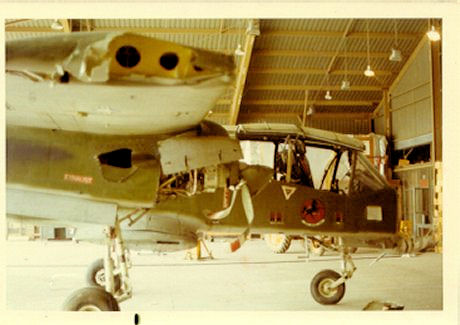 In The Hangar: A Close Up Look At The Damage 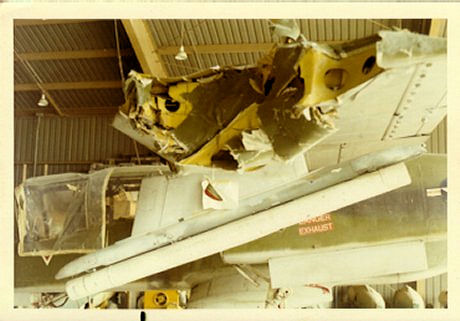 Flip Side Of 394 In The Hangar

155394 was repaired and several weeks later it emerged from the hangar as:

VAL-4's First Grey Bronco
Eight months later 155394 became the sixth Bronco VAL-4 lost when it crashed approximately 15 miles south-east of Phu Vinh after being hit by ground fire and was struck as a Combat loss on 10/29/71. Lt.'s Segars And Smith ejected and were WIA.
As a postscript, Lynn Henish added:
JK Pell and I were first on-scene when Bubba and Smith punched out in Long Binh Province prosecuting a target single-ship on the way back from a Rung Sat patrol. We covered the evac by an Army slick from Saigon who had heard the call on Guard frequency. I watched her (155394) crash twice. As it turned out, Bubba had happened upon an NVA Regular Battalion being off-loaded in the Delta, evidently unbeknownst to anyone! He tore 'em apart with his Zunis and LAU-69 on "ripple". It looked like Iwo Jima down there from where we were overhead.